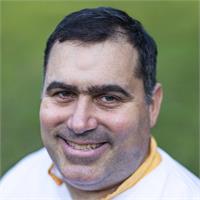 Discover the eight-limbed philosophy dedicated to the development of your full potential and the expression of your inner spiritual self. Focusing on a rich text, this class will review the heart of the individual basic sutras that are essential to seeing this scripture as “a practical guide to the mind” and how it informs all branches of Yoga. Suggested reading: The Yoga Sutras of Patanjali with commentary by Sri Swami Satchidananda. May be attended on a drop-in basis with no preregistration.

By donation
Reverend Sam Rudra Swartz, an Ordained Integral Yoga Minister. Also know as ”The Sarge,” is a KAY (Kidding Around Yoga) Trainer, and has a previous ordination as an Interfaith Minister from the All Faiths Seminary, New York City (2004). He is certified in Integral Yoga from Satchidananda Ashram-Yogaville and The Integral Yoga Institute of San Francisco as a Hatha Yoga (2011) teacher, having taken the Accessible-Yoga Teacher Training in San Francisco, as well as a Meditation (Yogaville, 2011), and a Raja Yoga Teacher (IYSF, 2012). His teaching home base is the Integral Yoga Institute of New York and has been fortunate to travel internationally offering classes and training’s. As a minister he has performed wedding ceremonies as well as other life cycle events in many places both locally in the New York/New Jersey area as well all around the U.S.A.