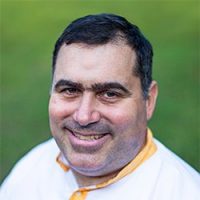 Reverend Sam Rudra Swartz, an Ordained Integral Yoga Minister. Also know as ”The Sarge,” is a KAY (Kidding Around Yoga) Trainer, and has a previous ordination as an Interfaith Minister from the All Faiths Seminary, New York City (2004). He is certified in Integral Yoga from Satchidananda Ashram-Yogaville and The Integral Yoga Institute of San Francisco as a Hatha Yoga (2011) teacher, having taken the Accessible-Yoga Teacher Training in San Francisco, as well as a Meditation (Yogaville, 2011), and a Raja Yoga Teacher (IYSF, 2012). His teaching home base is the Integral Yoga Institute of New York and has been fortunate to travel internationally offering classes and training’s. As a minister he has performed wedding ceremonies as well as other life cycle events in many places both locally in the New York/New Jersey area as well all around the U.S.A.
He received his Bachelor of Music in Brass Performance, with a Tuba Concentration from Boston University’s College of Fine Arts Music School in 1996 and is an accomplished musician having performed as a soloist in Carnegie Hall and was an active busker (a street musician). Currently he uses his music training with his voice serving as a prayers leader (a lay cantorial leader) at the Conservative Synagogue of Fifth Avenue in New York City.
Rudra, earned his certification to ”kid around“, as a Children’s Yoga Teacher from Kidding Around Yoga in 2012. He served as a Counselor and Co-Director of Camp Yogaville, at Satchidananda Ashram Yogaville Virginia’s summer camp from 2011 — 2019, where he was bestowed with the loving nickname, ”The Sarge“, for showing an ability to discipline the children in a loving way. He was part of the Kidding Around Yoga Camp in Florida in the same capacity from 2013 — 2016 and led many Kidding Around Yoga training sessions as a trainer in New York and other places both domestically and internationally from 2014 — 2109.

No event found!
View All Teachers